Sometimes you come across something which at first seems ordinary, but upon closer inspection and study it has something interesting. I came across in a collection that I had bought a while ago, a letter from The Hague to Ghent (Belgium) from 1871. Not very special, except that it is old and has nice stamps. 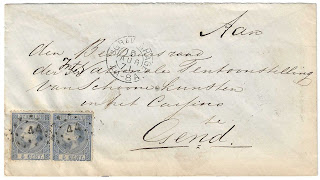 On the front the letter has two 5ct with dot stamp The Hague and a so-called "two-letter-cancel" 's-Gravenhage and on the back a cancel Hollande par Nord 2 and a cancel from the city of Gand. The letter left The Hague on August 16, 1871 and arrived in Ghent the next day via Antwerp. Fun but not very exciting. 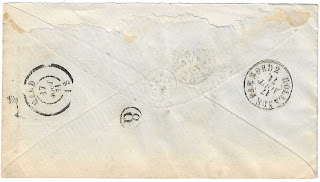 Until I started to read more closely the address of the receiver. To:

The sender wrote national first and later corrected himself by trying to write "Inter" in between. The reader should know that I have always been interested in "Fine Arts". I even traded a little bit in art in a distant past and had a gallery of my own. Hence my eye fell on the receiver. What was the International Exhibition of Fine Arts in Ghent in 1871?

The International Exhibitions of Fine Arts in Ghent

It was not easy to find anything about the international exhibition in Ghent in 1871. But after a lot of searching, there appears to be an "Indication of Paintings" on the internet. A sort of catalog of the paintings on display in the exhibition, with regulations governing the conditions for the artists.

Going through the "Indication" I noticed that quite a few Dutch artists from The Hague took part; no fewer than 21 artists lived in The Hague at the time and submitted work. This includes Mesdag from the Panorama Mesdag. Would my letter be from Mesdag? hmm nice thought but i don't think so. Firstly, the chance is small and it is not even certain that it belongs to an artist. Secondly, even though I'm not a handwriting expert, it doesn't look like his handwriting compared to open sources of Mesdag's letters.

Whoever the letter actually belongs to remains a mystery, of course, even though it seems likely that it could be one of the 21 participating artists.

As a collector in the digital age, I send and receive stamps from all over the world. This works genrally speaking, very well. Unfortunately s ometimes not and mail disappears without a trace. As far as I am concerned, Russia in particular is notorious: three quarters of all letters sent "disappear". That is why I no longer sell or buy to collectors in Russia...  Within the Netherlands, only one postal item has disappeared without a trace in the past twenty years. Within Europe unfortunately a handful during the same two decades. It is therefore not so bad with the reliability of the postal services. But it's still very frustrating when it happens.  As a seller, I let buyers know in advance that I cannot guarantee that the mail will actually arrive and I send them an image of the shipped item. This is to avoid as much discussion as possible. But even then things can go wrong.  On May 18 I sent a letter and it was delayed. The buyer, by now rightly became impatient and mai 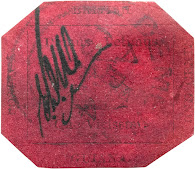 On June 8, 2021, Sotheby's in New York auctioned the most expensive stamp ever. The price raised was actually a bit disappointing. For "only" 8.3 million dollars (6.85 million Euros), the British Guiana 1ct magenta was sold off and went to another owner. Then there's the Sotheby's auction commission, of course.  "A bit disappointing" I hear you thinking "Why?". Yes, I admit: it is a huge amount for a small piece of paper. It is actually the most expensive piece of material by weight, in the world! And yet the price is disappointing for the following reasons:  1. The last time this piece of paper (because in fact it is and remains that) was auctioned was at Sotheby's and it sold $9.48 million . That's worth just over $1.1 million less than it was nearly seven years ago.  2. Sotheby's estimate was somewhere between $10 and $15 million  3. The sale of such an object is, as usual, well hyped. It had been widely publicized in the philate

Today the Dutch post (PostNL) has issued a sheet of five stamps, which are "designed" via artificial intelligence. According to PostNL, these are the first postage stamps designed with an algorithm in the world (!). You can judge for yourself whether it is a success. The algorithm is based on Dutch stamps from the period from 1852 to 1920. They do indeed look old, but also unlike Dutch stamps. The stamps from the mentioned period really look completely different; they look nothing like it, from that period. Personally, I think they're pretty ugly. Fortunately, all other stamps of the Netherlands are designed by people. The stamps are part of a sheet of personal stamps:  PostNL writes about this: "The Digi Art stamp sheet has 5 different stamps in 5 different designs. The 5 stamps show 5 unique computer-generated stamps, against a dark background. At first glance, the 5 stamps shown look like they have ever been issued, but appearances are deceiving. They may have the